Coming up this quarter

Did you know AAEE collaborates with authors to produce children's books featuring environmental themes? The latest is 'There's No Such Place As Away'and it's just $12 at the AAEE homepage.

​​Alice Hathorn has kindly agreed to give a site inspection of Fowles Street  Sustainable Woodland and Meadow Urban Woodland Site. Demonstrating changes a small community can make to increase urban biodiversity and restore ecosystem function to a woodland pocket park.​​

Learn about the journey of a small urban park's return to ecological health applying the simple evidence-based woodland and meadow method.  View the stunning parkland, designed to restore biodiversity and ecological function, learn how this method could be applied in Canberra's schools, gardens and parks to create a sustainable network of ecological services across the city.​​

Posted by Australian Association for Environmental Education ACT Chapter at 14:39 No comments:

The Annual General meeting was held on 24 November -Minutes here

What a diverse group of educators to lead AAEEACT in 2022!

This was followed by the ACT 2021 Environmental Education Excellence Awards and a guest presentation by David Shorthouse from STEP Garden at National Arboretum. This informative presentation showcased the development of an important ecosystem and wonderful resource available to the community to learn more about the southern tableland ecosystems of the Canberra Region. 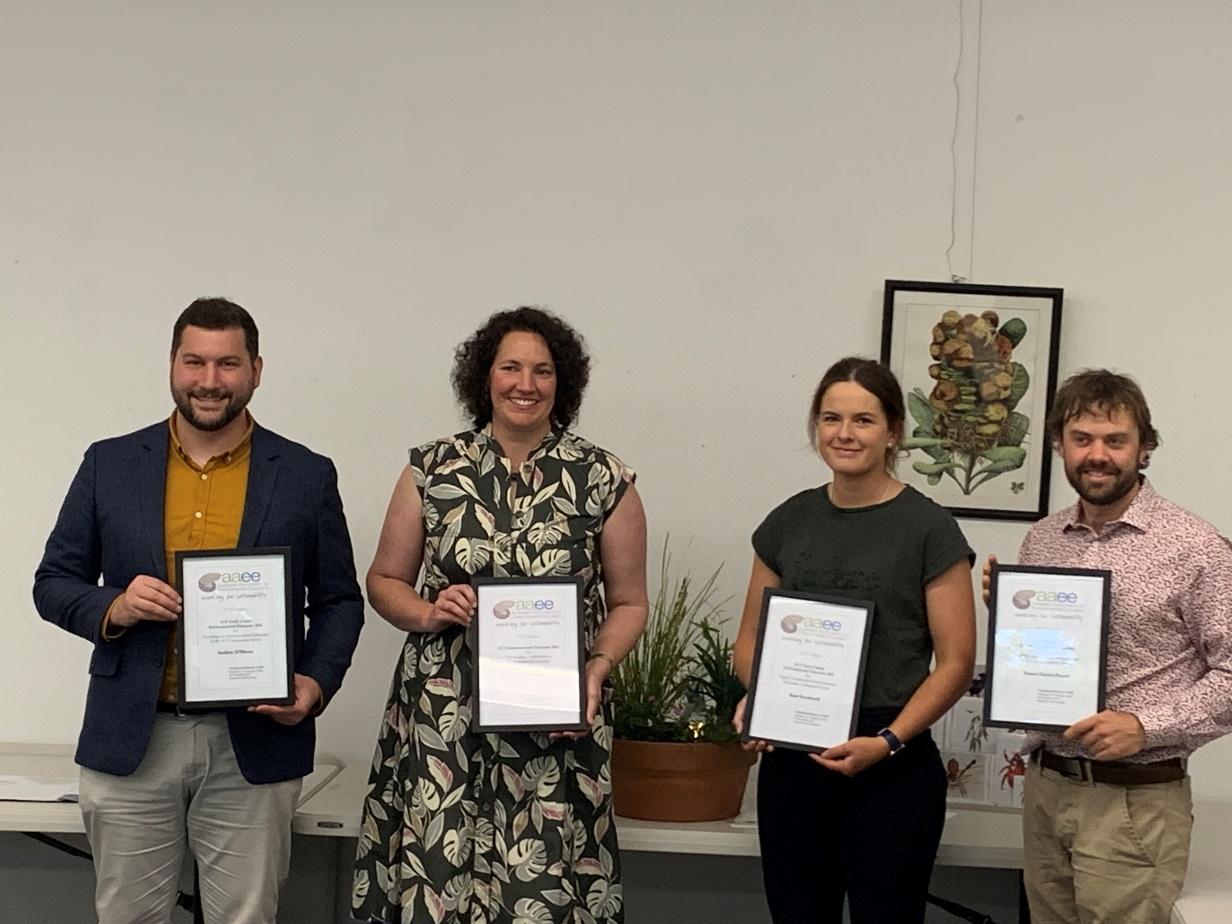 Congratulations to AAEE ACT Environmental Educators of the Year awardees 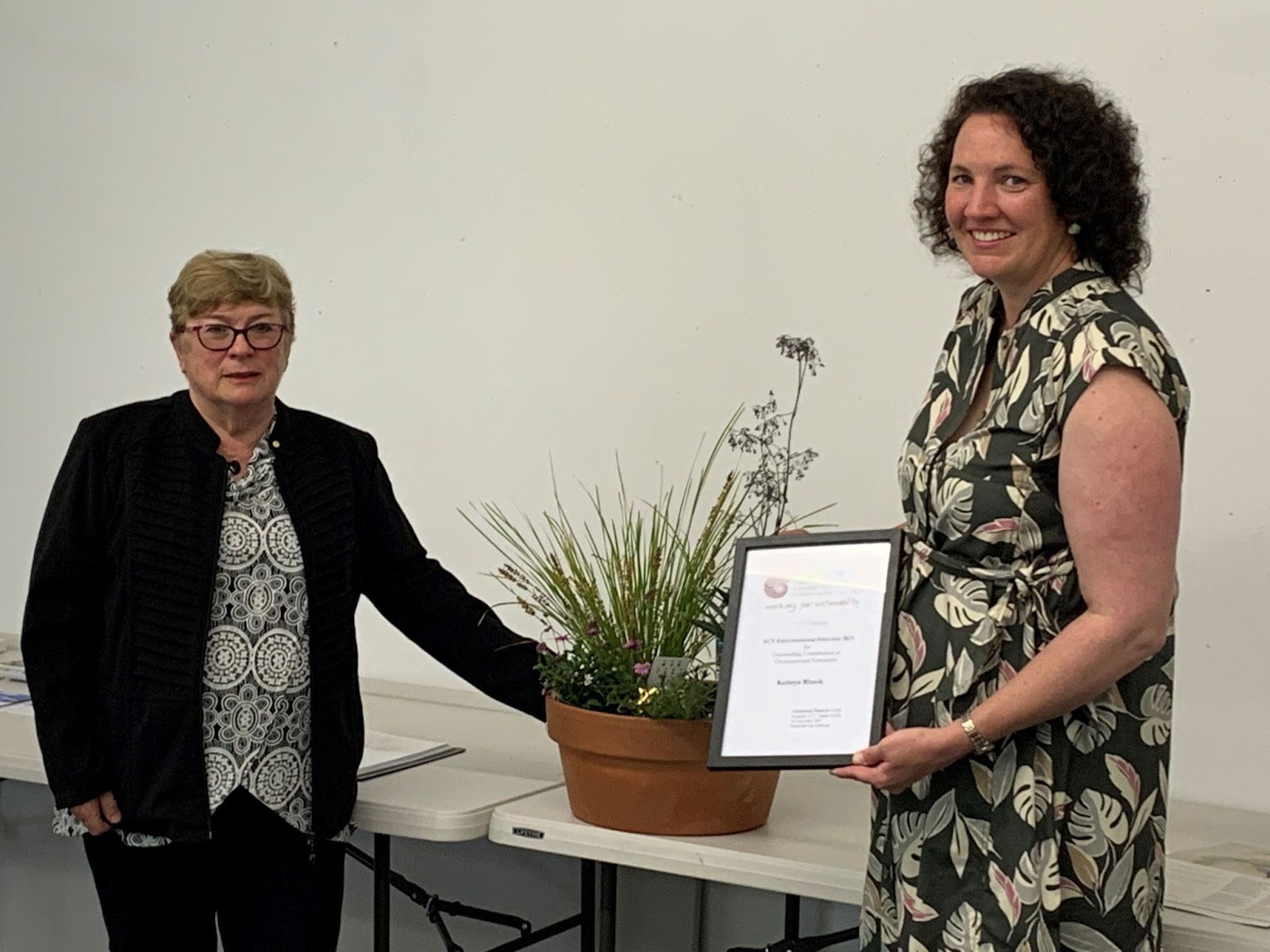 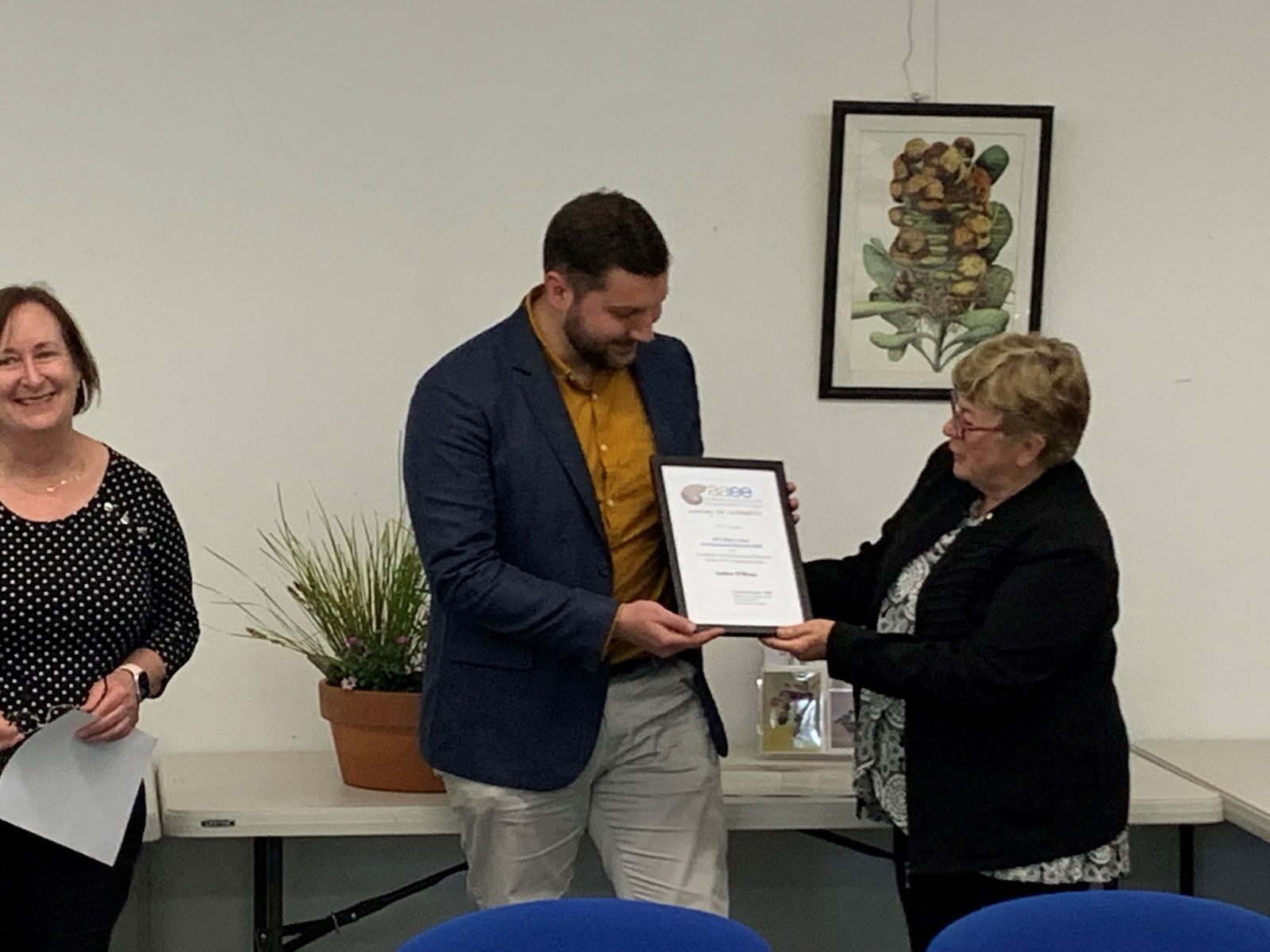 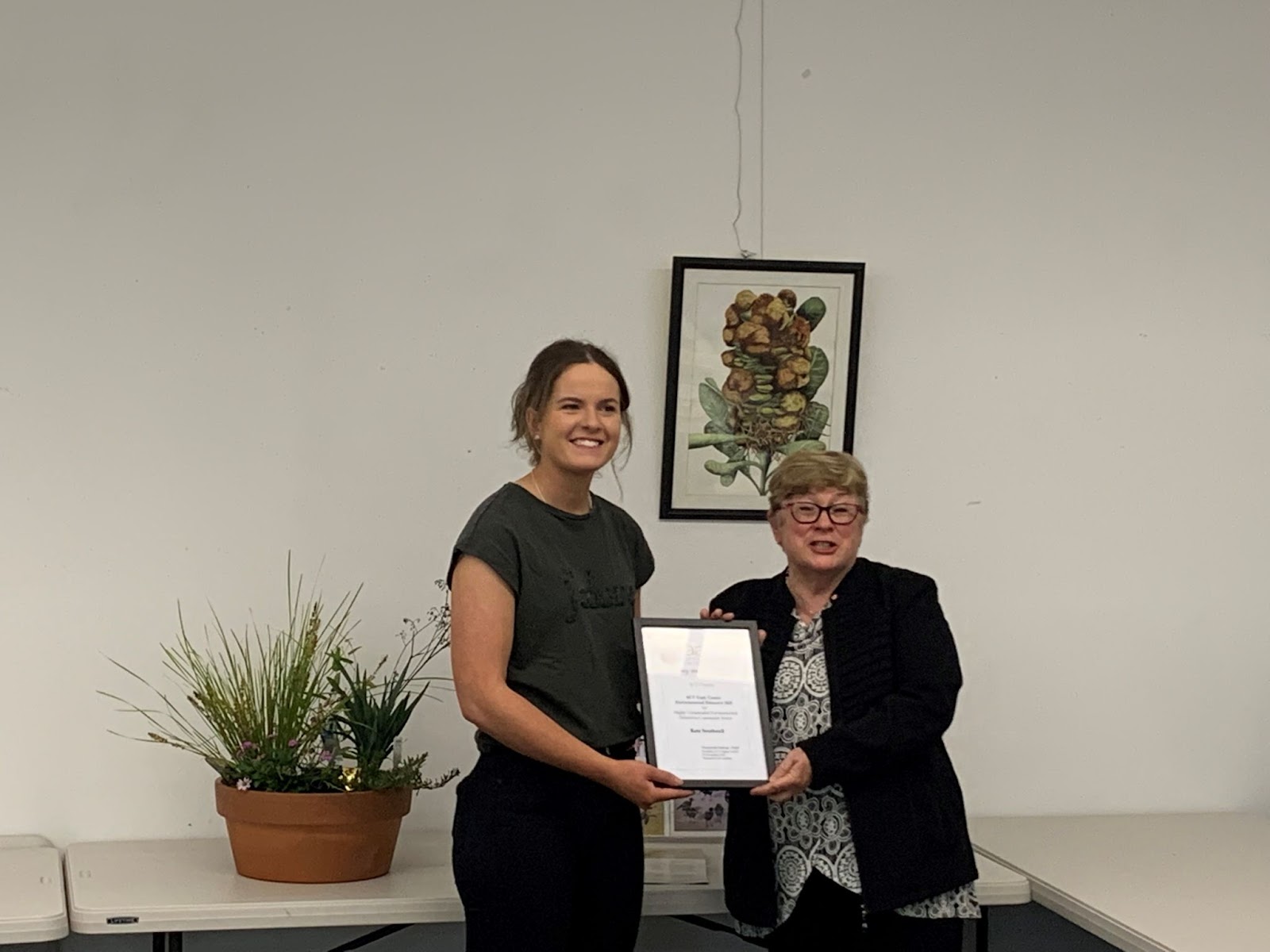 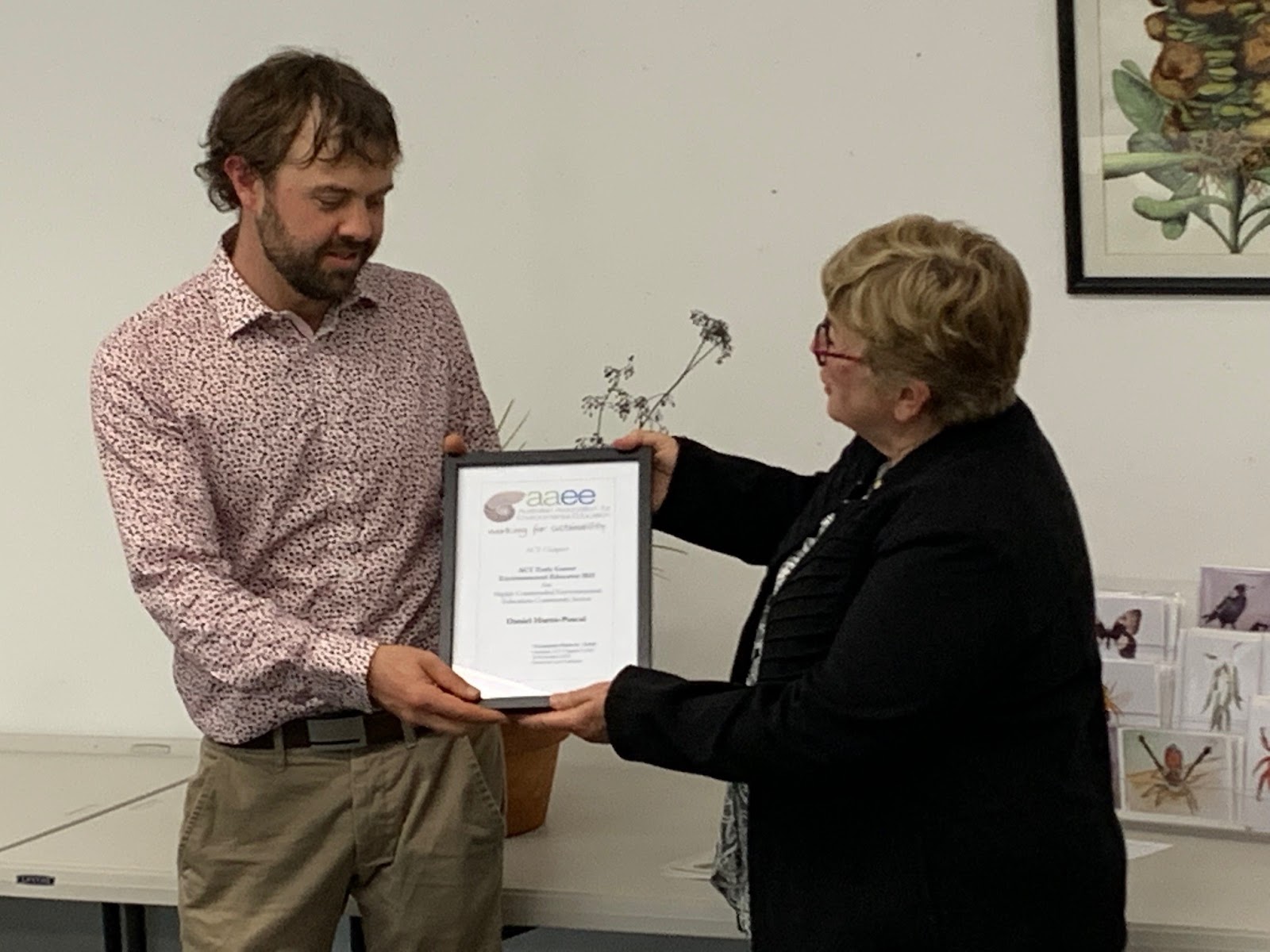 Posted by Australian Association for Environmental Education ACT Chapter at 13:46 No comments:

Members and friends all welcome!

This a COVID safe event, please follow all ACT health guidelines, masks are recommended but not mandatory, tea and coffee provided, bring your keep mug.

Hope you have been busy bees these spring months and, leaping as we are towards the end of this term, did you know it's both Pollinator AND Frog ID weeks this week? See exciting resources below.
Looking forward to seeing you at the AAEE ACT Chapter AGM 24 November. It will be followed by a tour of the wonderful Southern Tablelands Ecosystems Park (STEP) garden at the National Arboretum and all friends and educators are welcome. Details here.  RSVP please to aaeeact@gmail.com

See below for great webinars and other events by your fellow ACT environmental educators.
Curious about what AAEE members and member groups are up to around Australia? Read the latest OzEE News here.
Coming Up ...
Read more »
Posted by Australian Association for Environmental Education ACT Chapter at 22:01 No comments:

From Barren to Beautiful – how does the health of the Biodiversity in our local ecosystems hold the key to mitigating the risks of a warming climate?

The AAEE Fellowship is to recognise a member who has made an outstanding contribution to environmental education at a national and international level over their career. Local member, Keith Skamp has certainly done that over the years as detailed below. At the 2021 AAEE Conference in WA, Keith was awarded the AAEE Fellowship. Here in the ACT we count ourselves lucky to have such a talented and distinguished person as an active member in our Chapter.  Since joining the ACT he has been actively mentoring and supporting our local ACT educators. Whether it be as a panel member for our awards, helping with submissions and advocacy to local government, sparking ideas around curriculum or other issues in ACT members, Keith is our local treasure. It is wonderful to have his lifetime of work in environmental education acknowledged by AAEE. 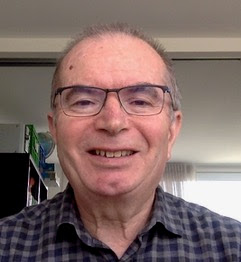 Keith is an Adjunct Professor in the School of Education at Southern Cross University in northern NSW. He has held visiting scholar and professorial positions at several universities in England and North America. His research and teaching areas are science education, environmental education, and research methodology. He has been an AAEE member for several decades. He moved to Canberra and has been involved with the ACT chapter for about 5 years, assisting with various submissions, meetings, and publications (including a soon to be published paper with Jodie Green on Earth System Science Education). His personal involvement with environmental issues dates to the late 60s when he heard Paul Ehrlich speak in Sydney about his book The Population Bomb. It influenced many of his later decisions.

Keith introduced Environmental Education (later to embrace ‘Education/Learning for Sustainability’) as a subject in preservice Teacher Education degrees (and later other degrees) in the mid-80s. This was the only EE subject offered at Southern Cross University until 2011 (Keith continued teaching after his retirement in 2009). Keith’s contributions to teaching and learning were recognised when he received the Southern Cross University Vice Chancellor’s Award for Excellence and Achievement (Teaching and Learning) as well as the Australian Science Teachers’ Association’s Distinguished Service Award. Both awards were based, in part, on contributions to teaching and learning in EE.

Keith’s major EE research grants and outcomes have related to the impact of Learnscapes on school teaching and learning and school students’ willingness to take actions to reduce global warming based on their beliefs about such actions. The latter area is an ongoing international investigation with several very recent publications. These and other EE areas have been the focus of publications for over 35 years up to and including the present time; they include 20 refereed journal articles, two book chapters (one overviewing EE in Australia in 2009) and EE/Sustainability Education contributions to the most highly recommended (primary) science education text in Australian universities. Keith is the main editor and writer (Teaching primary science constructively [7th edition, 2021]). He has shared his EE research and scholarly contributions through papers at 19 international conferences as well as invited international lectures and seminars at various universities in Canada and the USA, the UK and Tanzania. Similar presentations have occurred at state and regional levels.

Some major funded EE consultancies that Keith has completed (several within the last decade) include the external evaluation of a University’s Sustainability Education contribution to its various degrees, a comprehensive world-wide research and best practice review on EfS for the then NSW Department of Education and Training and an international review of Air Quality Education for the Australian Government Department of Environment and Heritage.

Keith’s other contributions to EE over the years have included an ongoing role as an external examiner of doctoral theses, continuing in the role – for more than a decade - as a member of the International Board of Advisory Editors of the Australian Journal of Environmental Education as well as an occasional reviewer for other international EE journals and attracting EE scholars to Southern Cross University.

Posted by Australian Association for Environmental Education ACT Chapter at 20:58 No comments:

Email ThisBlogThis!Share to TwitterShare to FacebookShare to Pinterest
Labels: Awards

Celebrate the achievements of your school - sustainability awards nominations are closing soon! 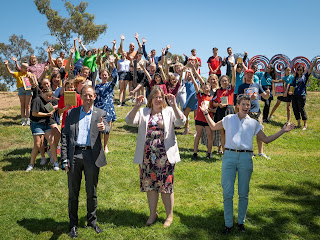 Actsmart Schools is a free program that specialises in supporting all ACT schools and their community to take climate action, reduce their emissions and improve their sustainability.

Submit your application in one of the 9 categories to celebrate the sustainability achievements of your school.

Submit your application in one of the 9 categories to celebrate the sustainability achievements of your school:

The Actsmart Schools team are here to help you, your students and your school make a positive impact on our environment. Contact us by emailing actsmartschools@act.gov.au or call  6207 8886.

Posted by Australian Association for Environmental Education ACT Chapter at 18:51 No comments: